This is the most recent update from the National Weather Service in Birmingham, Alabama, about the Treat of Severe Weather in Elmore County for tomorrow afternoon, Sunday, March 3, 2019.

A small portions of Elmore County have been placed in the ENHANCED Threat Area, though most of the County remains in the Slight Threat Area. Please find the graphic below that shows the treat area and timing of these storms.

Severe storms are still expected on Sunday. Several uncertainties remain regarding the severe threat, the biggest being the northward extent of the threat.

1) Upgraded to ENHANCED Risk across SE counties – models are really zoning in on the areas along/south of I-85 as the highest threat area for damaging winds and tornadoes.

1) Warm front – Several models continue to keep the warm front pretty far south (roughly I-85). However, due to some model differences & other factors, we have continued to keep a risk of severe weather mentioned at least as far north as the I-20 corridor.

2) Timing – The cold front is expected to re-orient itself as it moves across Central AL. This means it will enter as a more north-south oriented boundary and then transition to more of an east-west oriented boundary. This makes it a bit more difficult for timing placement. Expect some adjustments to the timing with tomorrow morning’s update.

3) Development ahead of the main front – this is possible across the SE counties, but the main severe threat remains with the line of storms ahead of the front.

Generally 1″ to 2″ of rain (with locally higher amounts) is forecast through Sunday night, with the highest amounts across roughly the southeastern half of Central AL.

1) Quick-hitting system with no prolonged period of rain.

2) Widespread flooding not expected. However, with saturated soils, some isolated minor flooding is possible, mainly in low-lying and/or poor drainage areas.

3) No worsening of river flooding in the north & west expected, but recession may slow briefly. 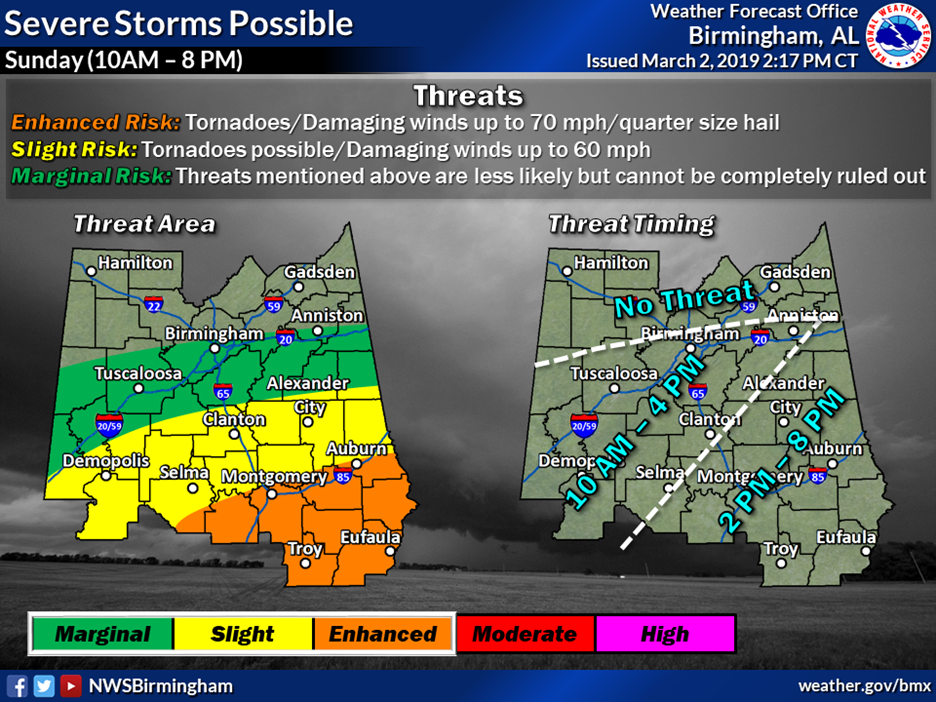