Today is devoted to tornado safety.

TORNADO
defined as a violently rotating column of air that is in contact with the ground. If the circulation is not on the ground, then it is defined as a funnel cloud. Tornadoes usually descend from thunderstorms. Wind speeds in tornadoes can range from 65 mph to 318 mph (the highest tornado wind speed ever recorded). Your safety depends on being constantly aware of the possibility of severe weather.

Tornado WATCH
means that conditions are favorable for the development of severe thunderstorms and tornadoes in and close to the watch area. A watch is normally issued for a large area covering numerous counties. The watch is intended to give you time to review your safety rules. The sky may be sunny, but weather changes can take place quite rapidly.

Tornado WARNING
means that a developing tornado has been detected by National Weather Service Doppler Radar or has been reported on the ground by reliable sources. A Tornado Warning is typically issued for a portion of counties at a time and usually lasts no more than 45 minutes. If a Tornado Warning is issued for your county, you should seek shelter immediately. If you see a tornado or feel threatened, move to a safe place immediately, as precious seconds can save your life. 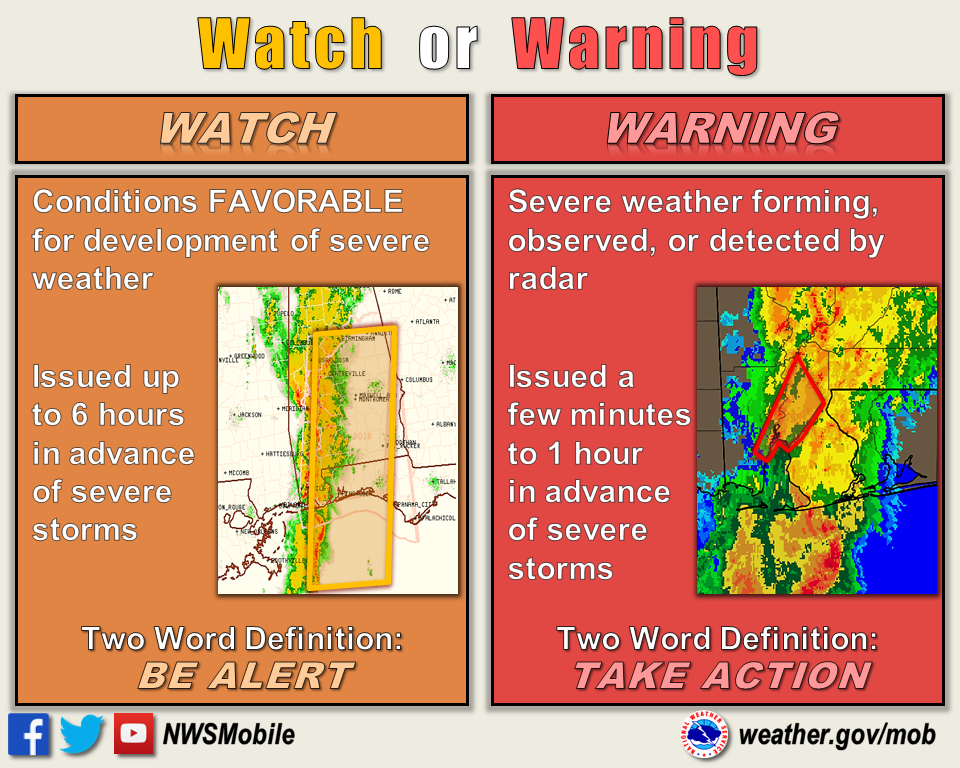 If you are in a home or small business:
Go to the basement or a small interior room such as a closet, bathroom or interior hallway without windows on the lowest level. Put as many walls between yourself and the outside as possible. If possible, get under something sturdy, such as a heavy table, or use a mattress to protect yourself from flying debris. Most injuries associated with high winds are from flying debris, so remember to protect your head. If available, put on a bicycle or motorcycle helmet to protect yourself from head injuries.

If you are in a large business, school, hospital, shopping center or factory:
Go to the designated shelter area. If a shelter area is not available, the best place is to go to an interior hallway on the lowest level. Stay away from the structurally weaker portions of buildings, such as windows and rooms with expansive roofs, which are more likely to collapse when tornadoes strike.

If you are in a mobile home or home on stilts:
Get out and take shelter in a sturdy building or storm shelter. If there is not one nearby, take shelter in the most interior room that has no windows, such as an interior bathroom or closet.

If you are caught in a vehicle:
Get out and into a sturdy shelter. If one is not available nearby, get to a low spot and cover your head from flying debris. Do not take cover under an overpass as this does not provide adequate shelter during a tornado and can cause increased wind speeds due to a tunneling effect.

Do not waste time opening windows in an attempt to prevent damage to a building. The old belief that damage could result from rapid pressure changes during a tornado is NOT TRUE. It will not make any difference in a tornado if the window is open or not.

Your safest course of action is to take shelter immediately when a tornado warning is issued for your area. 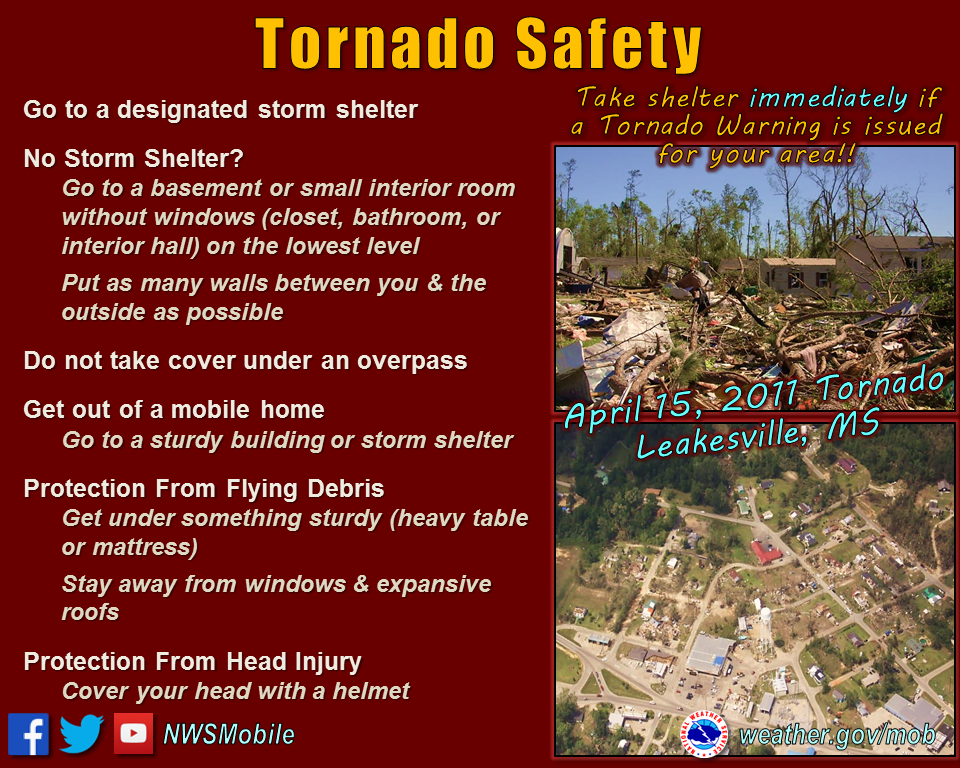