Posted at 9:00 a.m. on 9-7-2017 – According to the National Hurricane Center, Hurricane Irma is expected to pass north of Hispaniola today and be near the Caicos and Bahamas, moving west-northwest at 17 mph. Maximum sustained winds remain near 180 mph. Irma remains an extremely dangerous Category 5 Hurricane. Irma is expected to turn more northward Saturday over Florida. On this track, Hurricane Irma’s high impact weather looks to be east of our area this weekend and into early next week. According to the National Weather Service, the cool air that we are experiencing this morning is part of the system and trough that is going to cause the steering of Irma to the north, north east. Should the forecast track remain the same we will likely begin to see some breezy conditions late Sunday into Monday and they may linger as long as Wednesday.

This is a very dangerous system and will have catastrophic effects on the areas that it impacts. Use this time now to contact family and friends that you may have in the forecasted path to encourage them to put their Emergency Plans into action now.

Residents of Elmore County, this is a great time to review your Emergency Plans now! Should this system make any last minute drastic changes or should the next system impact our area, we need to be ready to put those emergency plans into action.

At 800 AM AST (1200 UTC), the eye of Hurricane Irma was located near latitude 20.1 North, longitude 69.0 West. Irma is moving toward the west-northwest near 17 mph (28 km/h), and this general motion is expected to continue with some decrease in forward speed for the next couple of days.  On the forecast track, the eye of Irma should continue to move just north of the coast of Hispaniola today, be near the Turks and Caicos and southeastern Bahamas by this evening, and then be near the Central Bahamas by Friday. Maximum sustained winds remain near 180 mph (285 km/h) with higher gusts.  Irma is a category 5 hurricane on the Saffir-Simpson Hurricane Wind Scale.  Some fluctuations in intensity are likely during the next day or two, but Irma is forecast to remain a powerful category 4 or 5 hurricane during the next couple of days. Hurricane-force winds extend outward up to 50 miles (85 km) from the center and tropical-storm-force winds extend outward up to 185 miles (295 km). The latest minimum central pressure just reported by an Air Force Hurricane Hunter plane is 921 mb (27.20 inches). 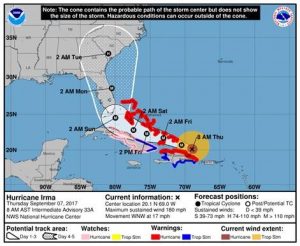 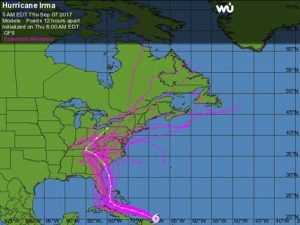 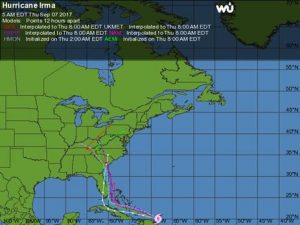